Junkmailer Vol. V, No. I 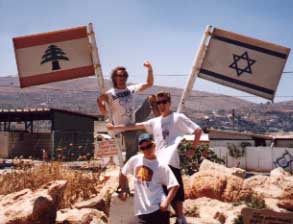 After layovers in New Jersey and Frankfurt, we finally land in Tel Aviv, Israel, where we are again detained shortly, this time by the Heavy Metal detectors. Fat Adi and Ishay pick us up and take us to eat pitas and hummus. Enough people speak English that we are afforded the luxury of learning only bad words. And, as if eating pitas and hummus and learning Hebrew weren't enough Jewish culture for our first day, we are invited to attend a Bar Mitzvah where we will do our best not to eat like pigs, drink like fish, or dance like idiots, as us Americans are expected to do. 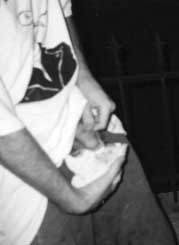 After sleeping 30 of the last 36 hours, Craig is officially "ill. " Assuming Israelis are no different from folks back home, they must also enjoy having sex with inanimate objects. We, therefore, deduced that the place which makes "the world's best falafel" must also theoretically make "the most humped falafel. "After sampling it, it was unanimous that they, indeed, made the world's Most Humped Falafel.

31 people have died at the beach since we got here due to adverse tides and no lifeguards, so we had to check it out. Mikey and Craig got stung by jellyfish, and we all got chapped eyeballs from the extreme saltiness of the Mediterranean, but none of us drown. Mikey has had 5 Most Humped Falafels in the last 24 hours. 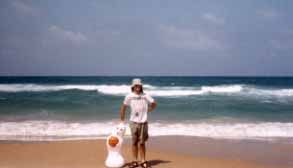 Armed with only a phone number and a couple pages of Hebrew translations (like "I am a goat," "Sir, please remove your trousers," and "In America, people think I am a putz") we took off to visit a potential friend on his kibbutz. The bus nearly erupts into a rumble between yarmulke-sporting holy-men and M-16-toting service men and women that even the bus driver pulled over to get in on. We got off at the correct stop, and without injury, no doubt due to the supreme watchfulness of BonneVicci. By nightfall we are playing on 3rd-rate equipment in a bomb shelter a few kms from the Lebanese border to a small, inattentive crowd of 4. The kibbutz is a commune with family bunkers, fixed meal times, it's own school, and assigned chores. It's like a big family summer camp. We were given our own room and Federico, our host, tucked us in. 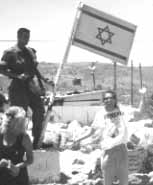 He shut the door on his way out to minimize the common threat of rats, snakes, and scorpions.

Fedi drives us around northern Israel. We arrived at the Lebanon border where, as silly as it sounds, the gate was left open. We drove on through and took in as much Lebanese culture as we could from the back seat of an economy car cruising between heavily-barbed fences and the ruble of a one-time border town. A military Jeep closed in on us and we made a hasty retreat. Next stop: a druid town on the Syrian border where we experienced baklava, the candy that rots your teeth faster than it takes Alan to forget a song. 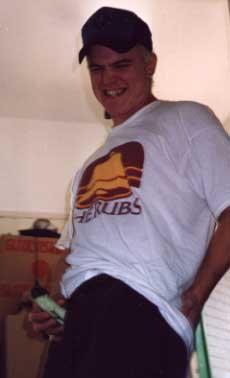 Tonight's show has been canceled due to a guy breaking up with his girlfriend. Ah, the fast-paced world of DIY Rock'n'Roll. Instead, we practice Arabic slang by hurling obscenities out our window at dogs and chickens. Then we sculpted genitalia out of cucumbers.

While USELESS ID was practicing at the Green Action offices a couple weeks ago, a downstairs neighbor, Jimmy, attacked the band with a knife for disturbing him. We were the first band to play in that office since the incident. We stripped to our underwear and began to Rock. Another downstairs neighbor came rushing up to complain about his ceiling tiles cracking and raining down on him. We pretended to turn down and proceeded to make musical fools of ourselves. A bit later, Jimmy popped in, listened for a minute, and left without confrontation. Though it was an over-capacity crowd clocked in at over 30 folks, we only sold one CD. The proceeds were spent on pitas, humus, and watermelon. BonneVicci accompanied us to the beach today and, while we fought the waves that continue to take more lives every day, he stood watch over our things on the shore. He began to garner some attention, so Fat Adi told us we'd better high-tail it home before the bomb squad showed up to take BonneVicci away. Now we call him BombeVicci.

We keep getting evicted from people's houses because we either smell too bad, are too loud, attract too many visitors, or just plain annoy. We are never able to shower due to our constant relocating. And, on our way to where ever we're going next, we sweat like mad hiking under the scorching desert heat. Could be worse, though. We could be staying in Raz' neighborhood where kids fire guns from bicycles and streetfights include swords.

On only an hour's sleep (thanks to Tommy and ET's all-night knee-slapping, guitar-twanging sing-a-long held in our sleeping quarters) we shuffled around town searching for a place to shower. The night was spent driving around in a van like hooligans pasting up posters for our show and furthering our Israeli-insult skills.

According to all we speak with, Tel Aviv crowds are the punk-as-fuck types who will unfailingly hate us, spit on us and, likely, beat us. Rather than scare us, the tales only entice, since those are welcome and expected reactions to our crappy band. The venue is a multi-roomed warehouse and the event is a rave. Kids were literally coming by the busload and by 1am there were close to 1000 of 'em dancing, swimming, stripping in cages, passing out, making out, and doing what kids do. 90% of those in attendance were no more than 17 years old and many were as young as 13. And all the girls were dressed like they were in a Motley Crue video. It was disturbing, yet uncomfortably arousing. By the time we got to play (around 4am) the live music room was over-flowing with, among others, the aforementioned meanie-punks.

Before they could even blurt a heckle we started spitting on ourselves and informing them, in Hebrew, that we were "stupid, ugly, American asshole sons-of-bitches," leaving them nothing to do but "pit it up," as we say. We went berserk to let them know that, as crazy as they wanted us to think they were, we were still 1000 times loopier. In the process (but not on purpose) we broke 2 mics, 2 amps, a guitar, a mic stand, Craig's ankle, and a wall. Unbeknownst to us, a skinhead band was supposed to play after us, using the same equipment, so our friends rushed us through the crowd, out the door, and the heck out of Dodge before were "torn to pieces." 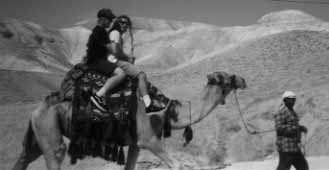 Cream Club: a 1000+ capacity theater in Haifa. It was a typical attendance for a YM show, which is to say not very attended. The body count on this show was (again, we did not do this on purpose) a snare drum, a bass pedal, 2 cymbal stands, a mic stand, an amp, a guitar, and a very large bird cage.

Slept, showered, and ate Most Humped Falafel. Had to say it was a good day.

Went swimming in a pool that resembled, in both smell and viscosity, an un-flushed toilet.

After being kept awake the entire night by loud singing, wrestling, frolicking partiers at Botz' house, we spent the rest of the day insuring that none of them got so much as a wink of sleep. It wasn't difficult because everytime we got comfortable somewhere we got kicked out for stinking up the place. By showtime (2am), everybody (us and all our friends) was extremely cranky, making for an excellent atmosphere while we played. Because our destructive reputation preceded us, we were asked several times not to break anything, and we were given minimal equipment as a result. The drums, for instance, had no cymbals. The only casualties during the show were a mic stand (broken by a non-band member) and our performance. We sucked, but Hey! What's new? We got home at 9am, making this morning the third sunrise we've seen since the last time we slept.

Got pawned off from house to house hoping to find a place to shower and sleep. One place we had to leave because even the plumber said we reeked. 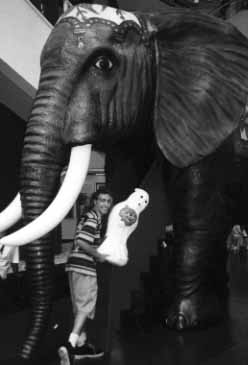 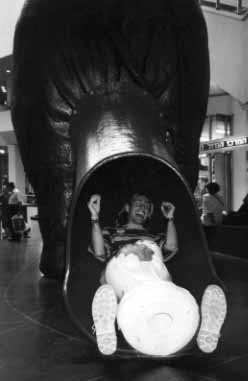 Found a permanent place to stay!We had befriended the owner of Adidas Israels' daughters a while back and they gave us the key to a bungalow in back of their (huge) house. It's got a kitchen, a shower, beds for each of us, a xerox machine, and a TV with cable!

Woke up this morning and the room smelt like dirty diapers. Fearing yet another eviction, we aired the room out, and even to some success! Even though the kitchen sink doesn't work, the shower floods the entire bathroom, the beds are broken, the xerox machine is out of toner, there is no remote control, and we seem to share the room with many ants and cockroaches and a black and white cat, this is still an awesome place which must be respected. 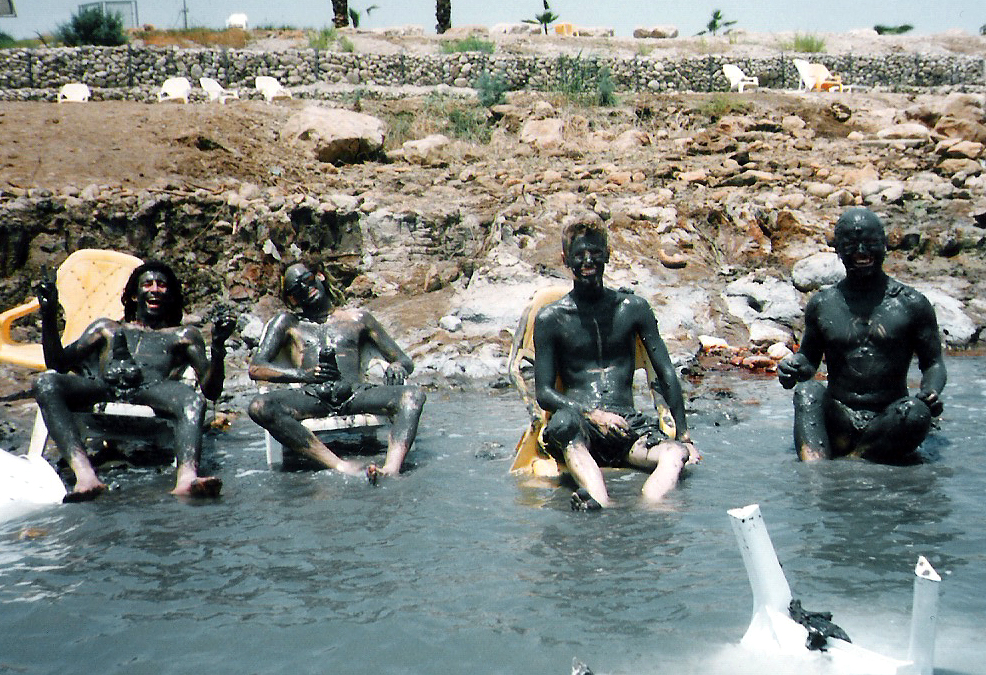 The water at the Dead Sea is so salty that it is impossible to sink. All you can do is float on your back and smear mud all over yourself. It is especially fun to make yourself appear unusually well-endowed using mud and some ancient molding techniques. It's 100°F (38°C) in the shade. The salty water makes all cuts, scrapes, eyes, anuses, and pee-holes sting, and 2 gulps of the stuff will kill you.

The show on Ishay's roof is canceled because, we can only assume, his family doesn't want us to break his roof.

Went swimming in the Sea of Galilee. The only miracle we saw was us not getting murdered for being as obnoxious as we were, yelling "stomach," "I am in the sea!," and "Don't fuck with the ghost!" at everybody within earshot. Bradley got attacked by a wasp the size of a spoon.

Went to tourist-it-up in Jerusalem. Being that we are not men of God, nobody would talk to us. Guy was afraid of getting stabbed by Arabs, so he acted like he was one of us Americans. Huh, imagine that: somebody wanting to look like an American tourist. We were given yarmulkes and headbanged to God like everybody else at the Wailing Wall.

Show in Jerusalem is canceled, perhaps due to an act of God.

We realized we are not going to make it to Egypt alive as long as we carry the blasphemy known as BonneVicci, so we spend 2 days in denial by dancing with teenagers, yelling vulgarities on buses, and eating Most Humped Falafel.

Mikey ate half his weight in falafel, setting a new Most Humped Falafel record. Some locals got jealous, kidnapped BonneVicci, and are holding him for ransom. Shirts are being made to raise funds for his retrieval... 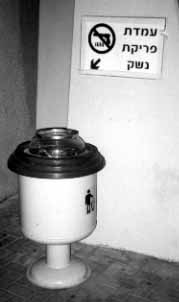 Please do not throw away live ammunition here, save that for the airplane restroom. 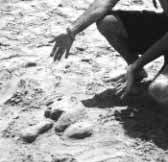 Mikey's inimitable penis-sculpting skills are rivaled only by Bradley's sandcocks. 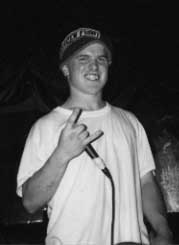 Mikey also excels at instrument disregard. Witness here as he 1) plays, 2) falls, 3)blames instrument, 4) punishes instrument, and 5) moves on, as if to say "I dunno, it worked fine a minute ago?!"

Our last, and possibly worst show. Our reputation preceeded us and Bradley was alotted, well, nothing in the way of drums. That's Ralph on the right loaning Bradley a cymbal, a drumstick to perch the cymbal on, and an arm to levitate it.

I see the Sea of Galilee. I view Hebrew poo.

Mikey second (and presumably last) pair of underwear lasted him three weeks, at which time he was more inclined to borrow a shirt from Tommy, then do laundry. Tommy, ever the helpful soul, saw no harm in loaning Mikey a shirt. And he probably hasn't minded this whole time, until he sees this picture.

Todah to all these kind folks: