No longer a band, now just a web site

Hailing from Pleasanton, California, Your Mother formed in 1990, before most of the band members had driver’s licenses. The band shamelessly combined punk, thrash, metal, Weird Al songs, and fart jokes into a whirlwind of stupidity that was best experienced by other 14 to 19-year-old suburban outcasts. Initially influenced by bands like Descendents, D.R.I., D.I., The Dead Milkmen, and other bands that start with the letter D, they expanded their sound to include all letters of the alphabet over the next ten years (except “U”, obviously).

Their first full-length album, One Big Inside Joke, released in 1995, was a bloated, confusing, and debated-ly genius 74-minute collection of spastic outbursts, Slayer covers, and inside jokes. The band, now mostly out of high school, set sail on several failed tours across North America, Hawaii, Australia, New Zealand, and even Israel before calling it quits in 2000. During that time they recorded and released several vinyl-only releases, which were compiled on the digital-only release One Big Disappointment in 2011.

2020 Marks the 25 year anniversary of “One Big Inside Joke”, so the band decided to re-release the album on cassette in Malaysia (no, really) and make a shortened, copyright-violation-free version available on streaming platforms.

Members of Your Mother are spread across the globe (California, Oregon, Georgia, Hawaii, Germany, and Portugal) and still make music as The Love Songs, Scheisse Minnelli, El Sancho, and Joseph Demaree.

Abridged version of One Big Inside Joke available now

You can finally listen to Your Mother on your favorite streaming services such as:

Over two decades in the making!

This is a video for a cover of the Saved By The Bell theme by Your Mother (recently described as an “alright San Jose band” despite being not alright or from San Jose).

It was filmed, and subsequently lost, by world famous cult cinema auteur Adam Barker on October 18, 1998 at and around the world famous Harvest Park Middle School in world famous Pleasanton, California. The footage was then found and handed over to Skot Leach whose greatest contribution to the project was losing it again. Then, in the wee dawn of the 2000's, the footage was found again and handed off to Alex Koll who also lost it. For a good 15 years it was unwittingly shuttled from hard drive to hard drive until Alex finally found both the footage and a way to cram an entire day's worth of recorded tom-foolery into a minute-long video.

Furthermore, this song appears as one of 49 tracks on Your Mother's first full-length release “One Big Inside Joke&rduo. It wasn't like we didn't have at least 60 original songs by the time of this video's filming, yet when opportunity knocked in the form of a-guy-we-know-had-a-camera we answered with this tune - a cover of a theme song to a TV show none of us particularly liked. Even more furthermore, Your Mother had two singers, and Mikey (né Zebra X) was not one of them. So basically this is a not an accurate portrayal of the band's sound, and yet it is a perfect portrayal of how the band functioned.

New Your Mother album for 2011!
“One Big Disappointment!”

Sources say it lives up to its name!

The exciting sequel to Your Mother's 1995 semi-hit album One Big Inside Joke is finally available.

After years of expensive litigation and blackmail, the master tapes have seen the light of day and are ready for your purchase in new exciting high quality 320kbps mp3 "download" format. One Big Disappointment features 39 songs recorded between 1996-2009, lovingly remastered and sequenced by Hot Lixx Hulahan in Kip Winger's basement. Most songs previously available only on obscure vinyl records, others never before released! For good reason! They're awful! I mean, wait, did I say that out loud? Included in the download is a 16 page companion booklet featuring over a hundred embarrassing photos and a comprehensive blow-by-blow analysis of the entire album by Craigums and Alan the Genius.

Due to excessive copyright violations and other ethical blunders, YourMother.com is the only online source for One Big Disappointment. Not available on iTunes or wherever else you purchase "music".

Note: Click the “return to onebigdisappointment@gmail.com” link on the PayPal invoice when done to get the album!

What, you're some sort of cheap jerk who doesn't value years of hard work and toil? You don't want our kids to go to a decent college? Oops, I left a link for you to download (192kbps, if you want the 320, you need to plunk down a couple bucks) it without paying right here. Some people call that stealing... some people call it liberating music from its oppressive overlords. If you have no conscious, are a bad, bad person or promise to mail us a box of cookies as payment, go nuts with that link. The rest of you should at least give us a few dollars, OK? 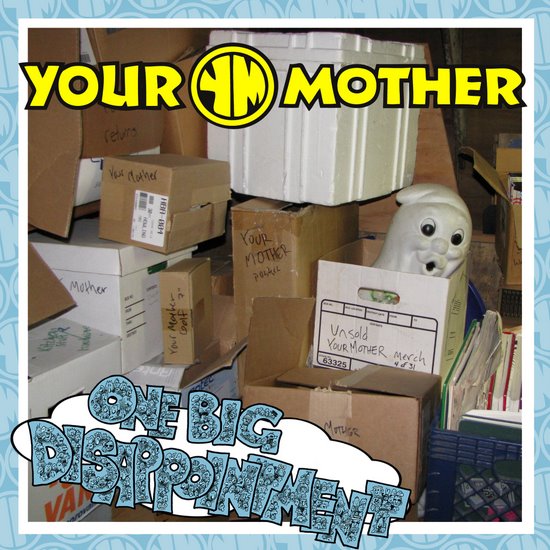